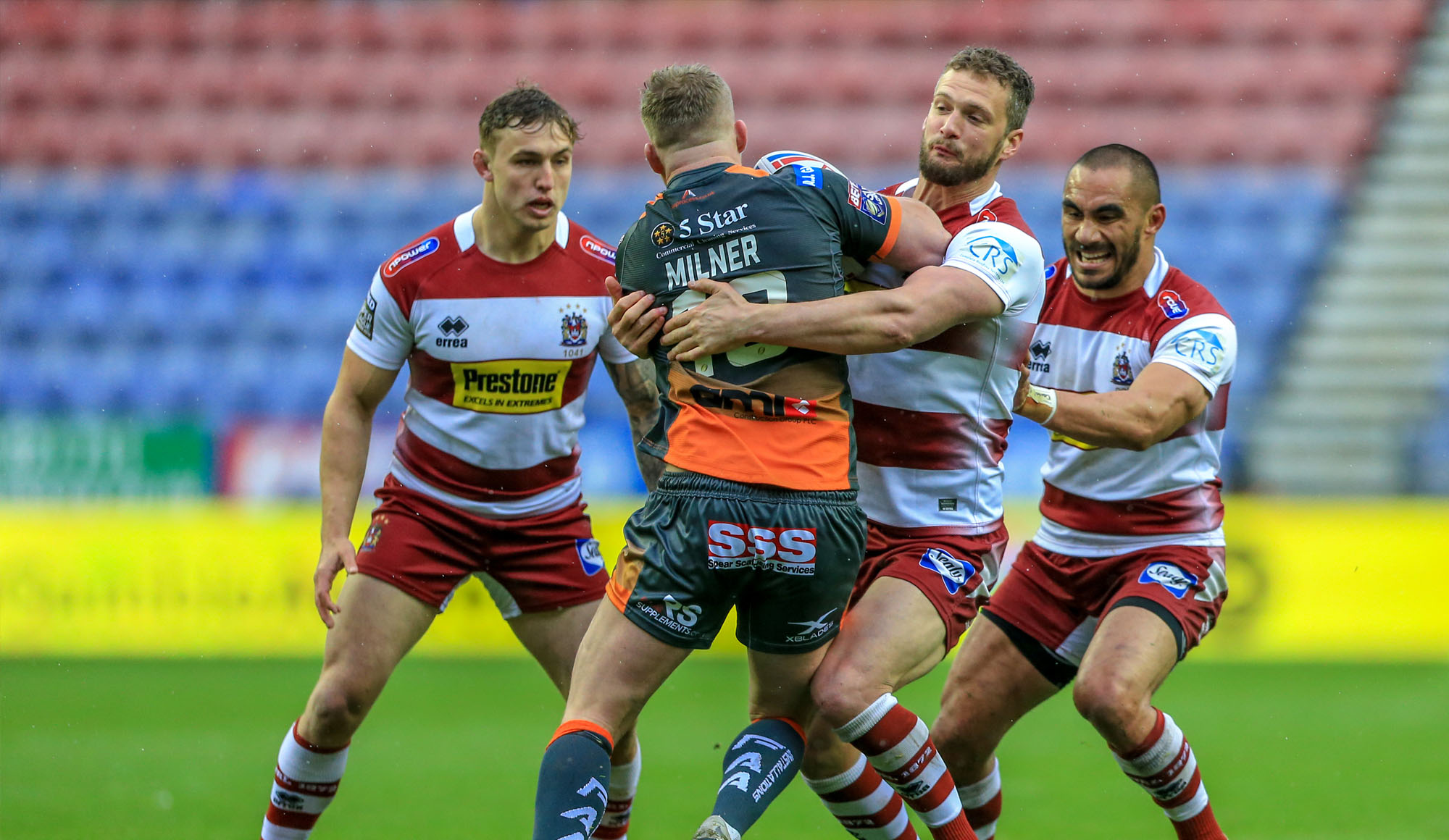 Wigan Warriors welcome Castleford Tigers to the DW Stadium for the final game of the regular Betfred Super League season.

This will be the third meeting between the sides this season, with a win each in the previous encounters.

Adrian Lam’s side came away victorious when the Tigers last visited the DW back in April, with a low scoring 6-4 win.

Meanwhile Daryl Powell’s side came from behind for a 38-28 win to claim the two points in the game at the Mend-A-Hose Jungle.

They currently sit two points ahead of Warrington Wolves in third, and a victory at the DW Stadium on Thursday would secure the position.

Castleford currently sit in fifth in the Betfred Super League table and will be desperate for a victory in order to confirm their place the playoffs.

Last time out, the Tigers beat Hull FC, who are also fighting for fifth, 44-12 at Mend-a-Hose Jungle, to go two points ahead of Lee Radford’s side.

With that victory providing a huge boost in their top five hopes, Daryl Powell will hope his side can confirm their spot with a win this week.

🏉 Daryl Powell has named his squad for this Thursday's match against Wigan Warriors!

Just one change from last week as Will Maher steps out, Chris Clarkson comes in. #COYF #PlayOffPush

This Thursday’s game will mark the 20-year anniversary of Wigan Warriors playing at the DW Stadium (originally the JJB Stadium). Coincidentally, their first ever game at the stadium was also against Castleford Tigers, a game that saw the travelling side come away with a win in the 1999 playoffs.

Wigan have already welcomed Daryl Powell’s side to the DW Stadium once this season, winning 6-4 in difficult weather conditions.

Adrian Lam knows the quality that the opposition holds and knows that his side must be at their best to finish the campaign with two points.

“They are going pretty good Cas, it’ll be a tough game no doubt. They are desperate to finish in the five and they need to do that on Thursday night. They are a skilful side who have defended really well in the back end of the season. It was a tough win in torrential rain last time here over them.”

The Warriors Head Coach also praises the close competitiveness of Super League this season, plenty still to grab at both ends of the table.

“Everyone bar St Helens has something to play for this weekend. It’s been a great competition this year, it’s gone by really fast and it’s going down to the wire to see who finishes where on the table.”

The man in the middle on Thursday night is James Child. His touch judges are Clint Sharrad and Greg Dolan. The Video Referee is Ben Thaler.

Tickets are available from the below prices.

DON’T FORGET, if you are a 2019 season ticket holder, Thursday’s game is your last chance to redeem your Scrum tickets which allows holders to purchase x 6 additional tickets to the game for just £6 each

The club operates three bus services to make it easier for fans to get to the DW Stadium on a match day. For more information, click HERE.

This week, Oasis Ltd (Oasis tribute band) will be bringing the DW Stadium renditions of Oasis’ brilliant back-catalogue. Frontman and former Wigan Warriors forward Andrew Isherwood will be performing as the lead singer of his tribute band Oasis Ltd.

Isherwood, who made 5 appearances for the Warriors during 1998 and 1999 is now enjoying life after rugby league.

Highlights will be on Wigan TV within two hours after the game and extended highlights 24 hours later. There will also be post-match interviews available, giving Warriors fans comprehensive coverage that you’ll not find anywhere else.