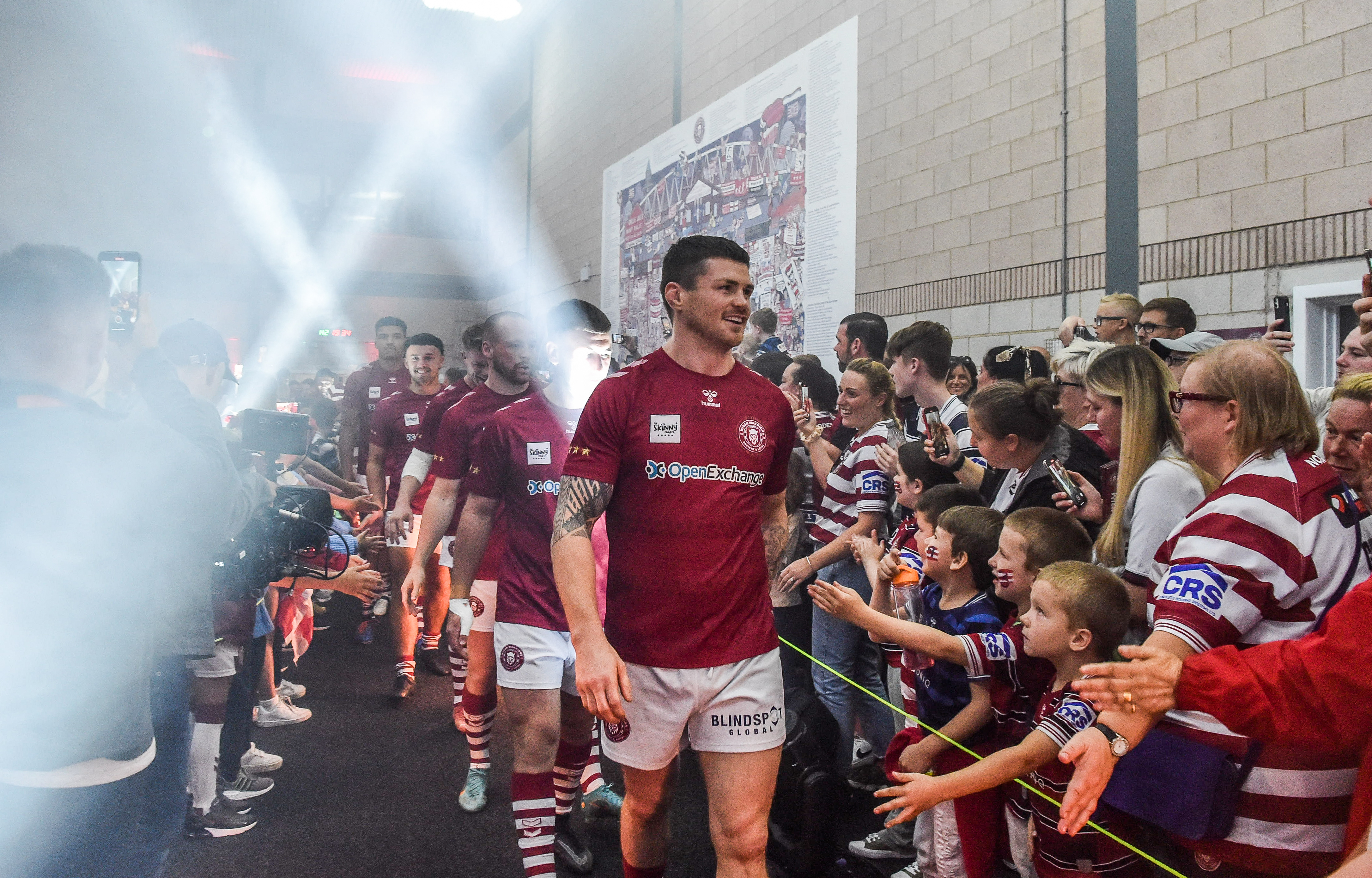 Wigan Warriors’ pre-match entertainment is widely recognised among the best in Super League.

NB: Please note that further information on game day experiences will be given in due course. We expect more information on match day restrictions for the 2022 season very soon.

A host of activity can be seen in and around the DW Stadium ahead of a Warriors game. Large numbers of fans regularly arrive at the stadium a few hours in advance to enjoy the pre-match entertainment.

The Robin Park Arena Fan Zone, Supporters Bar, Max’s Club and official Club Shop are just a few of the regular highlights. Whilst inside the stadium, live bands, themed shows, tenors, the Warrior Girls, Max, spectacular displays, fireworks, crowd interaction and much more create a pre-match entertainment extravaganza like no other.

The Robin Park Arena Fan Zone takes place before and after every Wigan Warriors home fixture at the adjacent Robin Park Arena, and is the perfect place to soak up the match day atmosphere before kick-off at the DW Stadium.

The indoor venue boasts a large capacity, great food, multiple drinks options and a mix of entertainment options that begin up to three hours before kick-off (check the club’s website and social media updates before each game for confirmed timings).

Fans also have the chance to rub shoulders with some of the first team. So, whether you want to grab a selfie or bag a signature, the Robin Park Arena Fan Zone is certainly worth the visit. Here’s what you can expect:

Warriors World – the Club’s official store – opens at Robin Park Arena each matchday, no later than two hours before kick-off.

Why not head down and pick up the latest hat, scarf or flag to add colour to the stands while the Warriors go into battle?

The Warriors World store is open seven days a week at the Grand Arcade Shopping Centre and 24-hours a day online. To visit the online store CLICK HERE. NB: Please note that these facilities are temporarily currently closed in light of the Covid-19 outbreak.

On match day, the South Stand Lounge is the Warriors Supporters Bar and is a great setting to relax beforehand and the ideal place to enjoy a drink and chat about all the action after the game.

In the bar, our MC for the night will keep you informed of the latest information, play a mixture of videos and music, give you the team news, and point you in the right direction for matchday programme sales, Golden Gamble tickets and raffle tickets.

The South Stand Lounge also has great hot food on sale, with a different theme each week.

Approximately 30 minutes after the game, a member of the coaching staff will enter the lounge to speak to one of the current first team players to get his thoughts on the game.

Max, our mighty Warrior mascot, hosts his own club in the Marquee, under the North Stand, ahead of every Warriors game.

Children of all ages are welcome to come and join in the fun and games, enter free prize draws, meet Wigan players and be in with a chance of being the official Wigan mascot at the next home game.

Max’s Matchday Club is open to families and children and opens approximately two hours before the game.

The Golden Gamble continues to be a fabulous way of supporters getting involved with the club on a matchday.

For just £1, fans have the opportunity to win a top prize up to £2,000. Other prizes include the shirt from a player of your choice, an evening at AMF Bowling, a collection of DVDs and the much sought-after jar of Uncle Joe’s Mint Balls.

Golden Gamble sellers are located around the DW Stadium and proceeds from the draw go straight to the Wigan Warriors Academy.

To find out the results from the latest games simply CLICK HERE.